Here are 15 of the best horror authors and their most well-known works.

The best-selling horror novels will send a shiver up your spine and leave you reeling for days if not weeks on end. Whether you’re looking for a classic ghost story or real-life serial killer scares, these 15 horror story authors are a great option to keep you up at night and leave you rattled during the day. Browse our list of the best books in the horror fiction niche and find where to get them on Amazon. 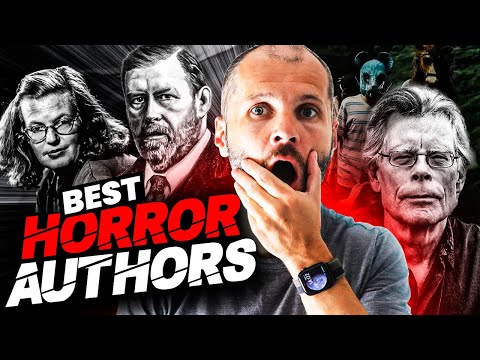 Stephen King is arguably one of the best horror writers on this list and one of the most popular among horror fans. His first professional sale was in 1967 for a short story published in Startling Mystery Stories. His debut novel Carrie was published in 1971, and King continues to publish short stories and horror books to this day over six decades later. King is a New York Times bestselling author and lives with his wife, sharing their time between Maine and Florida depending on the season.

Bram Stoker is synonymous with vampires, having written the original Dracula. Originally named Abraham Stoker, this Irish gothic author lived between 1847 and 1912, when he died after suffering several strokes. In 1987, the Bram Stoker Award was established and has been awarded every year since 1988. Popular Bram Stoker Award winners include other horror authors on this list like Dean Koontz, Neil Gaiman, Clive Barker, and more.

Born in 1916, American author Shirley Jackson wrote horror books like The Haunting of Hill House, published in 1959, and We Have Always Lived in the Castle. The latter is regarded as one of the best ghost stories of all time. Sadly, Jackson passed away in 1965 before her work found mainstream success.

Several of his stories have been made into movies, including Hellraiser and Candyman. In addition, Barker received an Academy Award for Best Adapted Screenplay for his work on Gods and Monsters, a period drama published in 1998 about the last days in the life of another esteemed film director, James Whale.

Dean Koontz is another popular New York Times bestselling author with some of the best horror novels and novellas under his belt. It’s hard to decide which book of his is the scariest; there are so many to choose from.

Whether you’re looking for a horror story about phantoms, ghosts, serial killers, or even horror novels with a bit of science fiction thrown in, Koontz is an ideal choice. Koontz’s horror books read quickly despite their intimidating volume, keeping readers on their toes and guessing about what may be coming next.

Anne Rice is best known for her series The Vampire Chronicles, including the novel Interview With a Vampire. The first book in the series introduced us to Lestat and Louis, later played by Tom Cruise and Brad Pitt in the movie of the same name. Since 2008, Rice has sold more than 80 million copies of her debut novel, which remains one of the best books about vampires in the entire horror genre. Sadly, she passed away in 2021.

Edgar Allen Poe is perhaps one of America’s most beloved poets and short story authors, having written classic works like The Raven and The Tell-Tale Heart. Poe lived between 1809 and 1849, with his death being just as mysterious as his life. A great deal of speculation surrounds his manner and cause of death, which is technically marked as “phrenitis,” a condition that caused brain inflammation and was often used in cases where the actual cause was unknown.

He began reading a year later at the age of three and writing his own work at around six. Lovecraft suffered from severe mental illness throughout his life and later supported himself through ghostwriting and revising work for other authors. He died in March of 1937 of intestinal cancer.

Ramsey Campbell is one of the most awarded authors in the horror book genre. He has been awarded the World Fantasy Lifetime Achievement Award, the Living Legend Award of the International Horror Guild, the Lifetime Achievement Award of the Horror Writers Association, and the Grand Master Award of the World Horror Convention. Campbell is described by The Oxford Companion to English Literature as “the most respected horror writer” in all of Britain. He currently resides in Merseyside.

Richard Matheson is a popular science fiction, horror, and fantasy author and screenwriter. Many of his books have been adapted for the big screen, some more than once, such as I Am Legend, most recently starring well-known actor Will Smith.

Matheson published his first short story at just eight years old, inspired by the 1939 movie Dracula. After serving during World War II, he attended the University of Missouri, where he earned his bachelor’s degree. Matheson died at age 87 in his Los Angeles home in 2013.

Peter Straub is a famous American poet and novelist with dozens of horror fiction books under his belt. Having co-written The Talisman with fellow horror author and close friend Stephen King, Straub has left a significant mark on the genre.

His unique works have enjoyed literary success, winning the Bram Stoker Award, the International Horror Guild Award, and the World Fantasy Award. Straub enjoys spending time with his family in his Milwaukee brownstone in his spare time. They say the apple doesn’t fall far from the tree, and Straub’s adult children also found careers in writing and film.

Ray Bradbury is a cherished American author of short stories and poetry. Born in Illinois in 1920, Bradbury spent his childhood in small towns, an aspect of his life that he would use to flavor his work throughout his lifetime.

He died in Los Angeles, California, in 2012 after a long career of successfully publishing more than 50 novels and over 400 short stories. Bradbury is best known for Fahrenheit 451, a dystopian novel named after the temperature at which books burn, depicting a future society where literature is illegal.

Dan Simmons is an American writer of horror books and science fiction literature. He began his career by publishing his work in the Twilight Zone Magazine, winning first place. Simmons has since won the World Fantasy Award for his work on Song of Kali, the Locus Award for his Seasons of Horror series, the Bram Stoker Award, and has been nominated for the British Fantasy Award. One facet that separates Simmons’ work from other horror authors is that he often blends genres to create wholly unique worlds that transport readers somewhere else entirely.

Born in 1907, Daphne Du Maurier is the author of the esteemed horror novel Jamaica Inn, a thrilling mystery about a woman who moves in with her Aunt and Uncle to a home located in a dangerous part of town. Although Du Maurier is most well known for her romance novels, most of her writing has elements of horror and the paranormal woven in to create a multilayered work of fiction. Du Maurier, aka Lady Browning, passed away in 1989.

Five of Ketchum’s books have been adapted to the big screen, and his work The Crossings was mentioned in a speech at the National Book Awards in 2003 by Stephen King. Sadly, he died in 2018 after a long battle with cancer at the age of 71.

If you fancy trying your hand at writing fiction, check out our list of the best books to help you along the way.

Final Word on the Best Horror Authors and Their Books

Read one of these great horror books by some of the genre’s most well-known and beloved writers if you’re looking for a great scare. Good horror authors will be able to draw you into their original storylines and thrilling plots, regardless of which book or short stories you select. Social Media is a great place to connect with your favourite horror authors. Check out our post on the best authors to follow on Twitter.

FAQ on the Best Horror Authors

What do I need to look for in a great horror writer?

The greatest horror writers aren’t always the ones with the most published novels. Instead, seek authors that employ topics you enjoy, like romance or science fiction components. Book reviews are a great way to find out what other people have to say about the work but beware of potential spoilers.

How do I choose a horror novel to read?

To begin with, you shouldn’t judge a book by what’s on the cover. So ignore recommendations, imagery, and even the title. Instead, skim through the first few chapters to see whether you enjoy the horror writer’s style and if you can immediately envision the characters, setting, and other key horror story elements.

How scary is too scary?

There’s no limit on the scariest of scares. Horror authors are constantly pushing the boundaries of thought-provoking literature, delivering chills and thrills with every novel. Reading reviews can help you identify any potential triggers to avoid books with particular themes that may be especially upsetting.

What authors from the 1800s inspired horror films?

Horror isn’t a new phenomenon, with some of the classic books within the genre even going on to inspire some contemporary horror films. For instance, Frankenstein was first published in 1818 and there have been at least 20 movies made that were inspired by the story. Dracula (1897) is another iconic 1800s horror novel that has inspired its fair share of film adaptations.

Who are the most famous Gothic horror authors?

Bram Stoker is probably the most famous classic horror author. His masterpiece, Dracula, continues to inspire writers within this genre. There is even an annual festival dedicated to his work in Dublin each year.

Who is the best-selling horror author?

When discussing best-selling authors, it is difficult to look past Stephen King. It has been estimated that King has now sold over 350 million books. His work has also had countless television and film adaptations.