Do you want to know how to write a first draft?

I once wrote the first draft of a book chapter that smelt so bad, I had to open up the office window while reading it.

It’s a good thing my first drafts are for me alone, and yours should be too.

“When I write, I feel like an armless, legless man with a crayon in his mouth.” – Kurt Vonnegut

When you sit down to write a first draft, you may lack confidence or feel uninspired by what you’re about to do.

Today, it’s you alone wrestling with your ideas and stories, and if you pin one to the page or if procrastination pins you to the chair, nobody needs to know.

Most writers, even successful ones, don’t write good first drafts. They’re more concerned with getting the words out of their heads and onto the blank page. They know they can fix their writing later on during a subsequent rewrite or during the editing process.

You may feel like you’re writing with a crayon in your mouth, and that’s okay.

Most successful authors rarely experience white-hot inspiration and perfect prose while working on their first draft of a book.

Instead, there’s a determined soul plugging away at their manuscript, one sentence at a time, looking at their word-count or the clock and all the while thinking, “It’ll do for now. I’m almost there. I can fix this later.”

How to Write a First Draft: Work on It Every Day… Until It’s Done The 19th-century English author Anthony Trollope produced an astonishing 47 novels during his career, and he published two dozen of these while working in the General Post Office.

Trollope said about writing every day:

“”All those I think who has lived as literary men,– working daily as literary labourers,–will agree with me that three hours a day will produce as much as a man ought to write.””

If Trollope completed a novel during his three-hour writing session, he took out a blank sheet of paper and started writing a draft of a new novel. Anthony wasn’t prone to angst and procrastination about his craft.

Successful authors like Trollope sit down in front of the blank page almost every day, not just on the weekends or when inspiration strikes.

They do the work because writing is their job and not just a hobby. They write more lousy first drafts than amateurs… and they learn what works and what doesn’t.

Now, I’m no Antony Trollope, but here’s the creative workflow I use to chip away at an intimidating first draft for a non-fiction book.

When you turn up in front of the blank page to write a first draft, forget your past accomplishments and failures. You may have written a hundred, a thousand or even ten thousand words yesterday. Or maybe you didn’t write at all.

Today, you just have to write a lousy first draft… because there are no good first drafts. The job of a first draft is only to exist.

You can fix all those messy mistakes, take out what doesn’t work and put in what’s needed during the second, third and fourth drafts.

How Do You Start a Rough First Draft?

I recommend not starting your first draft on page one.

Many professional writers seem like they possess superpowers (Trollope, I’m looking at you).

When they sit down to write, they stack up chapter after chapter of their book and smash through daily word counts, something us mere mortals can only dream of.

So do these professional possess some mysterious book-writing superpowers? Did a radioactive spider bite them while they were thumbing through between the dusty final pages of War and Peace?

Well, if you press a professional writer long enough, they’ll tell you that writing the beginning of a first draft is the hardest part.

An introduction to a non-fiction book, or even the beginning of a chapter, explains or sets up what’s about to happen. But how can you write an introduction if you don’t know what comes next?

Similarly, conclusions wrap up what they just said, but how can you write one if you don’t know what you just said!

Whether you’re a plotter or a pantser, it’s a perplexing conundrum that feels ripped straight from The Matrix.

Most professional writers don’t care much for conundrums, not when they have a deadline, kids to feed and an overweight cat to manicure.

Instead, they lay out their notes and outlines (if they have them), and they look for an easy way into their first draft. Then, they often start in the middle of their book and write forwards…or backwards.

Then, they often start in the middle of their book and write forwards…or backwards.

Opening up in the middle of your book will help you gain momentum faster. You could:

‘I Still Can’t Get Started!’

Have you ever looked at the blank page and found it difficult to get started? Well, it was Ernest Hemingway who said:

“There is nothing to writing. All you do is sit down at a typewriter and bleed.”

It’s no wonder many new writers struggle when they start sitting down in front of the blank page regularly.

Try writing down a great first line by another author and work from there. Like any good writing prompt, it gets your hands moving and the words onto the page.

Here are some of my favourites:

I recommend building a personal library of writing prompts that work for you over time.

You can get these prompts in books you like reading, articles you enjoy and even from the first pages of classic books. Or download the prompts I used below, for free: 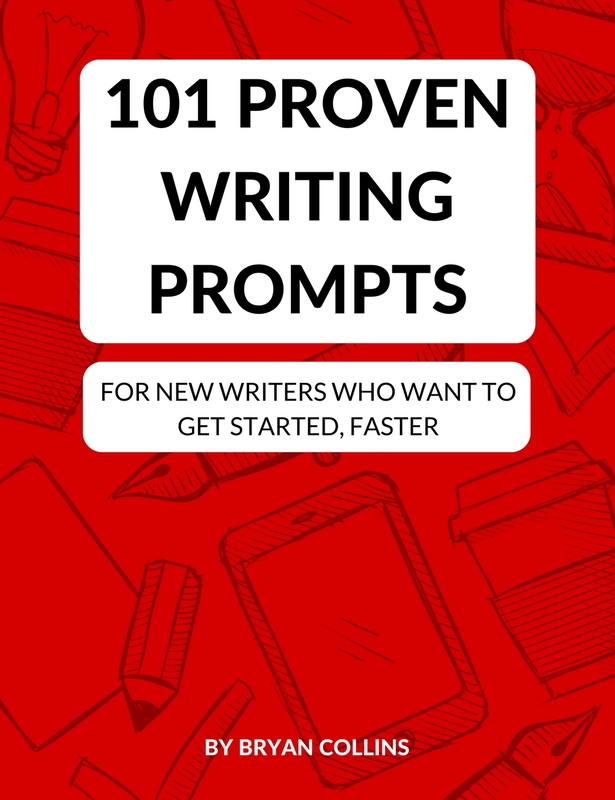 Need help getting started writing? Use these proven writing prompts.

On the other hand if you’re writing the first draft of an essay, decide on your priorities.
Prolific writers know how important it is to start writing quickly. So they go easy on themselves.

Ernest Hemingway famously stopped writing in the middle of a sentence so he’d know exactly where to resume the following day.

The American novelist Henry Miller was also a big believer in stopping before he ran out of ideas. He said:

“I don’t believe in draining the reservoir, do you see? I believe in getting up from the typewriter, away from it, while I still have still things to say.”

When you do this, your subconscious brain will continue working on your first draft while you’re sleeping, working or showering. When you sit down to write the following day, you’ll find it much easier to pick up from where you left off.

What to Expect From Your First Draft

If you want to learn how to write a first draft, I’d like you to lower the bar.

Many writers call their first pass the vomit draft. So don’t stop to edit yourself, straighten up your sentences or to see if what you wrote sounds reasonable.

If you begin fixing your draft, you’ll engage a different part of your brain, the part that belongs to your inner editor.

Your editor has a place in the writing process but not when you’re trying to reach a target word count. He/She will want to censor your work and won’t care that you’re trying to hit a word count by the end of your writing session.

Don’t be surprised when typos slip out and when some ideas are so clichéd that they make Days of Our Lives looks like Hamlet.

Your first draft serves as a means of getting creative ideas onto the page. It takes many revisions to turn a first draft into something you can publish, and you’re going to do all that later on.

How Long Is a Good First Draft?

First drafts are as long as they need to be.

Okay, you won’t be able to use a lot of your 300,000 words… but there’s gold in there. You’ll find it when you sift through your words, ideas and stories during the editing process.

Remember, your goal is to finish writing your first draft so that you have something to rewrite and edit. While working on the second or third draft, you can gather more people around your writing and fix your messy mistakes.

You can enlist unsuspecting family members, friends, an editor and even first readers.

A Note on Logistics

A first draft will cover your desk, floors and even your walls. You’ve got to crack open a part of yourself and spill what’s inside on the page.

You can’t do this if you’re working in chaos if you don’t know where anything is.

The American novelist John Cheever wrote most of his best works alone in a basement in New York wearing just a pair of boxers.

The British children’s author Roald Dahl wrote much of his work in a shed dedicated solely to writing at the back of his garden.

When the American poet Raymond Carver was starting off, he wrote on notepads in his car.

These men – as many professional writers like them do – all went to the same place regularly to work on their first drafts.

If you’re anything like me, you’ll have index cards on your desk, on the ground and your wall, stacks of well-worn books and a bin overflowing with crumpled papers and wrappers from chocolate bars.

So you’re going to need a place to write… and to make a mess without being disturbed. Creativity demands lots of space, but by all means, tidy up when you’re done.

Knowing When Your First Draft Is Done

Raymond Carver was the type of writer who spent weeks, months or even years working on his poetry and short stories, and even he recognised the value of writing his first drafts quickly.

“It doesn’t take that long to do the first draft of the story, that usually happens in one sitting, but it does take a while to do the various versions of the story. I’ve done as many as twenty or thirty drafts of a story.”

So please don’t overburden your first draft with expectations.

All of that can come later when you rewrite and edit your book. Once you’ve finished the first draft of your book, you can take the crayon out of your mouth and relax.

Now, you have a body of writing that you can mould and shape into something your readers will enjoy.

19 thoughts on “Writing the First Draft: The No-Nonsense Guide for Authors”