In 1887, Henri Matisse (1869-1954) began to study law and worked as a court administrator in Le Cateau-Cambrésis in Paris, but the trajectory of his life changed after a bout of appendicitis two years later. While recovering, he had little to do. So, his mother bought Henri a box of paints.

“From the moment I held the box of colours in my hands, I knew this was my life. I threw myself into it like a beast that plunges towards the thing it loves,” he said.

Matisse abandoned law to study art and work under artists like the painter John Peter Russell. He created still life and landscape paintings before moving to more impressionistic works.

He first made his name as an expressionist painter in the vein of Paul Cézanne and Marcel Duchamp. Critics regarded Matisse as an extremist and a wild beat or a Fauve.

Later, he became famous for paintings like Music and The Dance, and for his sculptures. Later during his career, his works were compared endlessly against those by his younger rival Pablo Picasso.

The American art collector and critic Leo Stein said about Matisse, “All his pictures were to give him a lot of trouble… He worked endlessly on his pictures until they were finished.”

Matisse rose early each day to paint. He worked through the morning and again after lunch. In the evening, he enjoyed violin practice, a simple supper and an early bedtime.

Throughout his career, he worked mostly alone, albeit with the help of assistants or models. He thought through his brush and spent hours endlessly reworking the same works.

In 1908, he said he wanted to create art “for every mental worker, for the businessman as well as the man of letters, for example, a soothing, calming influence on the mind, something like a good armchair which provides relaxation from physical fatigue.”

As Matisse grew older and more successful, his critics regarded him as a creative master known for expressive colours and sensual works. He also explored other forms like drawings and sculptures and was able to bring insight from one form to the next.

“I sculpted as a painter,” said Matisse, “I did not sculpt like a sculptor.”

In 1941, Matisse was diagnosed with abdominal cancer.

The 74-year-old artist underwent a serious operation in Lyon, which he didn’t expect to survive. The surgery left Matisse chair and bed-bound, and he was unable to move about easily to paint or sculpt.

After this operation, Matisse faced regular and complicated procedures to maintain his digestive system, and he recognised he was approaching the end of his life.

Many other creative people would have put their tools down and considered their most important work complete. Instead, Matisse regarded his declining health as a creative challenge to overcome and believed he was living a “second life.”

In an echo of what had happened when his mother bought a twenty-year-old Henri a box of paints, an elderly Matisse embraced a bolder artistic form, that of scissors and coloured paper.

With the help of his assistant, he created a series of large colourful collages from cut paper and covered the walls of his bedroom with them. These cut-outs varied in colour and size, and some became room-sized works and murals.

Matisse published the first of these cut-outs as a series of illustrations in the book Jazz in 1947, and by 1948 he stopped painting altogether to focus on this form.

“I have attained a form filtered to its essentials,” an elderly Matisse said about this new medium, which he used to express his joy of life.

“I have attained a form filtered to its essentials”

His cut-outs portrayed lively compositions of dancers, musicians, swimmers, the circus, clowns, funerals and animals while others evoked images of death and war. They also represent a stunning and original chapter in the artist’s long creative career, and they were relished by the critics of the day.

In 1951, an American critic said about Matisse’s final works: “Never before has Matisse seemed to me so young.”

His life and art demonstrate how changing the form and substance of your creative works can enable better, bolder ideas and more inspired thinking.

Instead, of holding too tightly to a way of working that you trust, consider how else you can express yourself and what you could do if your tools, your resources and even your health were stripped away. 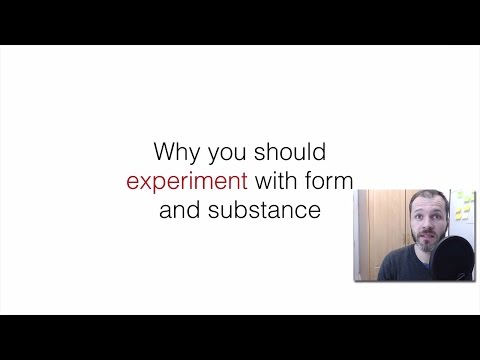 Why Should You Experiment With Form and Substance?

What starts as a book can become a podcast and a video… and so on.

Because Matisse told you so!

Firstly, if you feel blocked or stuck, experimenting with form is a relieving remedy.

The constrictions of your chosen medium may not be ideal for expressing your idea, and a little experiment (like a cardboard cut-out) could help you find a better means of expression.

Ideas are everywhere; they are free flowing and formless. It’s your job to plunge your bucket into the river and bring back what you can.

Later, you can form what you’ve brought home into something tangible that engages your audience.

The form surrounding your ideas will shift over the lifetime of your project, so, please don’t solidify it prematurely because you want the work to be done.

Remember too it’s your responsibility to get your ideas in front of as many people as possible. Presenting your ideas in different forms will help your audience engage in a way that suits them.

This isn’t derivative. It isn’t lazy. And it’s not uninspired.

What if, for example, a would-be reader of your book is blind or prefers to listen to audio? Will you create an audio book so they can engage with your ideas?

It’s also less exhausting to transform one good idea that works into a different form than it is to come up with a second idea. And a third. And a fourth.

You’re doing yourself (and your would-be audience) a great disservice by not considering how you might transform your idea into different forms to engage different people.

And, have you ever had the experience of studying under one teacher for months only to find it all but impossible to learn what they were trying to teach? Then, later, another teacher addresses the same topic, and everything falls into place? In many cases, it’s not that the second teacher was more accomplished than the first. Instead, listening to an idea multiple times, told in different ways helps it sink in.

You can help your ideas sink in through creative experimentation.

This is an extract from The Power of Creativity: An Uncommon Guide to Mastering Your Inner Genius and Finding New Ideas That Matter (Book 2 in a 3-part series) 12 thoughts on “Experiment With Form and Substance”